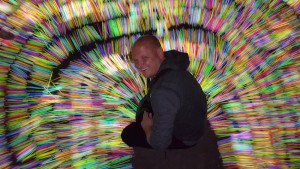 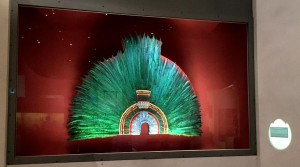 In this experimental performance, Marcus Neustetter is the facilitator and the public is the artistic contributor. Armed with cameras the artist merely documents that interaction of the public with a mass of lights. For the past 8 years Neustetter has asked people in diverse contexts to tell their stories with light and long-time exposure photographs. For the experimental performance in Mexico City the artist asked the public to play and express their ideas of the city through the use of glow-sticks. The result is not only a magical experience for the participants, but personal and collective images reflecting on the city and its stories.

Montezuma’s headdress is a featherwork crown (Nahuatl: quetzalāpanecayōtl [ketsalaːpaneˈkajoːtɬ]) which tradition holds belonged to Moctezuma II, the Aztec emperor at the time of the Spanish Conquest. However, its provenance is uncertain,[1] and even its identity as a headdress has been questioned.[2] It is made of quetzal and other feathers with sewn-on gold detailing. It is now in the Museum of Ethnology, Vienna, and is a source of dispute between Austria and Mexico, as no similar pieces remain in Mexico. Restoration efforts reignited this dispute in 2012.

For one night we temporary created the Montezuma’s Headdress in light.