What are the imaginary futures in this time of global re-invention?

Strategies for survival in a changing cultural industry seems to be a constant re-invention, challenging of one’s own status quo. As media artists, self-conscious networkers and strategists in their own right both Nina Czegledy (Hungary/ Canada) and Marcus Neustetter (South Africa) constantly respond to their contextual shifts and resulting needs. This approach of positioning oneself critically even to one’s own experience and discipline, results in a pro-active colliding of ideas, engaging in experimental practice and imagining futures.

Czegledy and Neustetter have prepared a small exhibition in which they collide images of their experiences to allow their juxtaposition, much like the Large Hadron Collider, to find new meaning and solutions. This becomes the starting point for observations and a performative presentation and aims to result in discussion and imaginings.

Virtueel Platform, the artists and the hosts in Utrecht, Leiden and Amsterdam invite you to join this experimental process and participate in imagining futures in this time of global re-invention. 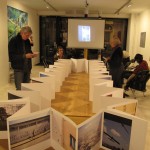 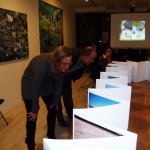 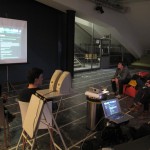 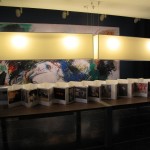 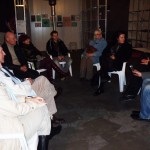 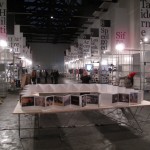 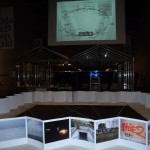 Theme: What are the imaginary futures in this time of global re-invention?

Strategies for survival in a changing cultural industry seems to be a constant re-invention, challenging of one’s own status quo. As media artists, self-conscious networkers and strategists in their own right both Nina Czegledy (Hungary/ Canada) and Marcus Neustetter (South Africa) constantly respond to their contextual shifts and resulting needs. This approach of positioning oneself critically even to one’s own experience and discipline, results in a pro-active colliding of ideas, engaging in experimental practice and imagining futures.

Czegledy and Neustetter have prepared a small exhibition in which they collide images of their experiences to allow their juxtaposition, much like the Large Hadron Collider, to find new meaning and solutions. This becomes the starting point for observations and a performative presentation and aims to result in discussion and imaginings.

The exhibition/presentation venues and their audiences in the three cities in the Netherlands represented three distinctly diverse professional/social groups: In Utrecht an interdisciplinary group bringing together professionals from different backgrounds who are working both locally and internationally; Academic and student participants from the Science faculty of Leiden University in Leiden and a group of artists and curators at Mediamatic Fabriek in Amsterdam.  Please find below details of the interactions with our participatory audience. At each venue we have announced our intent to record the conversations and agreed on this with out audience. The salient points of the anonymous recordings with the audiences form the base of this report.

11 December 2012 – 20:00 – UTRECHT: Galerie SANAA
Established in 2010, Galerie Sanaa a commercial Art Gallery exhibits contemporary artwork from the Netherlands and Africa. The gallery shows all media, traditional as well as experimental. The exhibition of the Visual Collider images became a starting point for a performative presentation followed by observations and a participatory discussion by the interdisciplinary audience.

The discussion centered around the questions of the audiences every-day concerns and trying to see whether these are “collisions” that can start to define a potential future scenario. Some of the audiences raised concerns of foreignness and how immigrants are treated within Holland as a cultural collision and others related their concerns around recent incidents on the soccer field, where local problems were made evident in a popular sport. This was linked to the role of the arts and how artists are part of identifying and highlighting these collisions or potential future scenarios. Discussions around budget cuts for the media arts, restructuring and both positive and negative reflections in the future impact were shared as a way of extending the question of the role of art in society.

Ideas were raised that the Visual Collider should be seen in relation to the Large Hadron Collider and that this project should be presented in CERN as a way of posing critical questions about the future of the infrastructure that was created for colliding particles.

While the dialogue was diverse and touching on cultural collisions and challenges, no real future imaginings were articulated. Instead, participants expressed their questions about the future based on current experiences that have to do with personal reflections and concerns. In this way, the discussion complimented the images of the book as people created their own snapshots and examples that were juxtaposed with the next.

On the invitation of Pedro Russo International Project Manager of the Universe Awareness (UNAWE) educational project and Jos van den Broek, Faculty of Science, advisor of the UNAWE team, we gave an illustrated presentation followed by a discussion with our audience at Leiden University.   UNAWE, established in 2006, developed an international network with 45 countries and over 500 educators sharing the same vision. The network is focused on promoting science education through astronomy. Our discussion was mostly focused on science and art education and related collaborations. In connection with the UNAWE educational program, our first question was: Is there an expressed need to work with other university departments, and/or with the public? How often is the work interfaced with the arts?  In response to this inquiry we have been told that the connections are no longer about science and/or art, but about culture. Part of this is probably due to the blurring of the definition of terms, such as “art”. Aesthetic (artistic) features remain important such as (in this case) – focusing on the beauty of the night sky. Simple art projects in elementary school education are also valuable (children are discoverers) like throwing paint balls to illustrate solar events etc.,

The changing environment of art science collaborations was also discussed. UNAWE is involved in international education projects for example in Colombia and the UK. Sometimes the common dominator is missing in these collaborations, especially if there is no reciprocal interest and thus it is problematic to proceed. There is now an initiative to start an artist residency program at Leiden University.

Recognition of research in the arts was also discussed. It is only recently that research involved in art projects is exhibited at art venues. It was commented that this research is similar to certain scientific processes and technologies- i.e. making visible something, which was invisible before, like the Hubble telescope, which made visible formerly invisible objects in the universe.

Part of the discussion centered on how is what we are all doing translated into every day experience? How is it relevant in art and science – is there a translation between art and science? These questions led to a further discussion on inter connection of science/art to everyday life. It was concluded that it is important in both of these fields as well as the trans disciplinary collaborations to create projects that are accessible to the public, instead of alienating people. It was noted that first we need a better communication strategy between ourselves and then achieve a way of artistic interventions with a broader public impact. Where and how can we take things forward is the next question. Leiden scientists are involved in creating awareness and certain events that bring people together, using art as a tool for a common experience.

The introductory presentation included reflections on the Senegal Tea Party an event Marcus organized in Johannesburg. This led to a brief discussion on how social issues and social innovation is more and more foregrounded, changing our social structures and thus the art environment. It was debated how to find more effective, satisfactory and sensitive ways to incorporate these considerations in artworks and art events.

In the followings we (Marcus and Nina) have been praised for the challenges we provide as a toolbox as a new instrument in terms of workshops and presentations. “These are of interest in science as well as the arts –they are instruments providing a new content.”

The discussion continued on comments of interactions and collaborative participatory discussions that have a big impact around the world these days. But how we connect all the conversations, how do we share them? This event  – it was commented- is a form of sharing but how we proceed to be more effective? It has been criticized how in the current atmosphere of changes the emphasis remains on institutions and institutionalized operations. A new platform should be developed, a dialogue created to find out what is relevant outside institutions for individuals and smaller groups. Informally organized events (within and without institutions) round tables including ample time for discussions at conferences represent tools towards an enhanced discourse.

As so many times before the definition of digital or electronic art became a topic. The changing role of the curator also served as a discussion point. How are organizational shifts observed? – For example these days curators are positioned in a managerial role, very different from traditional arrangements. How does this impact art practice and art exhibitions? Regarding organizational changes the new vision of the Dutch government was discussed at length, including “creative industry” as a new topic. This is an attempt towards a new economy – allowing artists and others involved in and impacted by the process to reflect on various approaches. Obviously there are benefits as well as negative sides to this reorganization process, which in its outcome will now include the amalgamation of design and architecture organizations together with media art.

Certain organizations are better adapted to the changes than others. Mediamatic for example remains flexible and nomadic, they have re-invented themselves frequently over the last decades. The location of the recently established Mediamatic Fabriek proves and recognizes the power of Arts. This location where people will be coming now for events, becomes an important location – it contributes an added value to the area, it shows how artist already contribute to (creative) industry.

On the other hand it was also felt that it is dangerous to remove media art from fine/visual art into a “creative industry” slot.  Although the following comment is based on the personal opinion of a member in the audience –it is important to note his comment: that the “creative industry” term is problematic as in this way media art becomes “applied” art.  He further comments: “I can’t see where ‘criticism’ can be included in critical industry”. A point of mutual agreement followed and concluded this topic:  beyond debates on the meaning and future implications, it is important to determine how our practice becomes more relevant for a larger audience within the creative industry.

Last but not least we had a very interesting contribution from an “outsider” of this artist/curator community: a retired medical specialist. He and is wife (also present) are frequently going to talks, and exhibitions, however they had admitted that they had never ever encountered this kind of discussion before. Being a medical man “I feel like an alien –he said- because I can’t contribute. I never heard about this event before I received an e-mail invitation to Mediamatic Fabriek.  Where is Mediamatic? What it Mediamatic? I asked – but now I find it all very exciting”.  His wife added praises for the new tools on the Internet, which allow people to connect. “I hope to find more connections, she said – it opens people’s eyes.”

In conclusion, we feel that the goal to share knowledge and experience with other professionals and the general public in the Netherlands was achieved with our modest tour, which remains a source of inspiration and hopefully leads to future collaborations.  Sincere thanks for Virtueel Platform’s support and special thanks to Floor van Spaendonck.