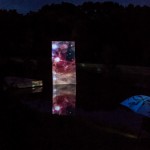 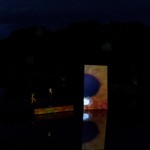 Lebogang Mashile, Joao Orecchia & Marcus Neustetter – Triptych
Improvised voice, sound and moving image performance responding to interpretations of the past, present and future, while making site-specic reference to the performance in the Cradle of Humankind: observing below, on and above the earth surface.

“On 21 December 2012, let us meet in streets and squares all over the world, and on the Web, to take part in the great inaugural celebration of the Third Paradise.”

In response to this appeal by Michelangelo Pistoletto, the NIROX Foundation in partnership with Martina Venturi and Mary-Jane Darroll is hosting a range of artistic interventions, performances and projects by artists that have expressed interest in responding.

13 artists will be presenting diverse ceremonies and artistic expressions as a journey of reconnection from 15:30 until 21:00 to experience the sunset of the Summer Solstice.

The NIROX Foundation in the Cradle of Humankind, the site of some of the oldest, hominid fossils ever found, dating back as far as 3.5 million years ago, is an appropriate site for an iteration of Michelangelo Pistoletto’s project the Third Paradise.

The term paradise comes from ancient Persian garden and means protected garden. Humanity has gone through two paradises. The first is that in which nature-regulated life on earth in its entirety. The second is the artificial paradise developed by human intelligence down through the centuries, in a process that led humankind to improve the quality of life, but also to come into conflict with the natural world. The time has come to begin the Third Paradise, in which humanity will reconcile and unite nature and artifice, creating a new balance at every level and in every area of society.

“The Third Paradise is aimed at re-conciliation between different polarities such as nature and artifice, and can be achieved only through the assumption of collective social responsibility” (Michelangelo Pistoletto).

December 21st, the winter solstice in the northern hemisphere and the summer solstice in the Southern, is a day celebrated by mankind since time immemorial. A fateful “end of the world” connotation, as widespread as it is unfounded, has been attributed to this day in 2012, proposing a theme that is recurrent in mythologies and religions as well as in the literature of fantasy and science fiction.

All imaginative factors aside, this date can take on a symbolic meaning, as it effectively corresponds to a climactic phase of human history. We are progressing steadily toward an inevitable collapse—the science is there to prove it.

The ecological imbalance created by exploiting and polluting the planet, the combined action of consumerism and population growth, causing a state of global unsustainability, the crisis of cultures that have determined the patterns of our common thought and practices—all have taken place in conjunction with an exponential growth of technological and scientific development that has given humankind unprecedented power to build and to destroy, and therefore extreme responsibility.

The whole of human society is now in the reckoning and so must face a historic transition leading to a complete change.

Participating artists at the NIROX Foundation: