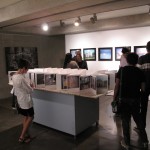 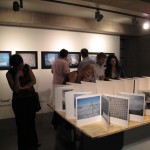 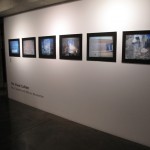 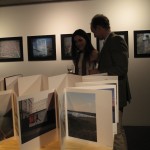 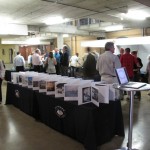 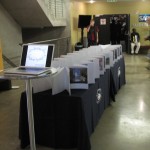 In May 1, 2011, the Large Hadron Collider (LHC) the world’s most powerful particle accelerator had finally uncovered the much sought-after subatomic particle  – “the God particle”. In the process billions of particles were smashed together in nano-seconds to recreate the first moments of the Big Bang. Thousands of scientists worked for decades to achieve this scientific spectacle “challenging those who seek confirmation of established knowledge, and those who dare to dream beyond the paradigm”.

The artists Nina Czegledy and Marcus Neustetter were so inspired by a lecture on the LHC that was presented at Sci-Bono Johannesburg in 2008, that, while they had already deliberated and tested project ideas for several months, they immediately adopted a fresh approach, which led to The Visual Collider. For the project the artists are presenting a small segment of their larger vision of an ongoing collision of images and impressions that represent the experience by both artists.

At the actual Collider every function including research, development and production, is based on principles and systems. In contrast the artists’ method is spontaneous, immediate and intentionally unsystematic. Nevertheless there are significant junctures. LHC is an immense scientific venture –Czegledy and Neustetter ‘s deep interest in the intersection of arts, science and technology is a crossover point. While in the sciences it is prudent to build on fundamental facts with analytical precision, in reality these investigations are often permeated with the exploration of the unknown, reaching unexpected revelations. In artistic practice working with the bizarre, traveling towards unpredictable destinations is a regular pursuit. In science a negative experimental result might become valid as an anticipated outcome. These unexpected results including happy accidents often lead to significant alternate solutions or theories. The artist’s adjacent image-sets in their book titled the Visual Collider, reveal unconventional interpretations frequently through unforeseen collisions.

Following the introductory exhibition of the Visual Collider book in Vela Luka, Croatia, Czegledy and Neustetter evolved the project into a journey to 10 more destinations across North America, and Central and Eastern Europe. The project is coming back to the place of first conceptualization, Johannesburg for an exhibition at Speke, Circa Gallery.