Into the Light
an exhibition by Marcus Neustetter

The exhibition will open with a light-performance at the NMMU Bird Street campus, progressing through the Donkin Reserve and ending at Vuyisile Mini Square. Please bring brooms and join the artist sweep lights through Central PE!

The ‘vertical gaze’, as the term suggests, is an act of looking. Gazing vertically is to follow sightlines directed upwards or downwards along the same vertical axis, be it looking up into the night sky or using the gaze to peel back and peer beneath the layers of the earth. The application of the term in my practice has evolved over many years of intimately observing and engaging with the work of archaeologists and astronomers. Such an intensive act of observation inevitably brings answers – and even more questions – to the observer, as both scientific disciplines look back on the past and collect historical data in order to offer up new perspectives for an imagined future as well as the immediate present. Objects unearthed from deep beneath the ground offer glimpses into our history, just as observing light from the depths of space contribute to our understanding of time. These encounters have compelled me to look more closely at the human condition within the context of time: how does one manifest ‘the now’ in order to exist ‘here’, in the present? This may be a universal question, yet I have come to realise through my own practice that the exploration thereof very often manifests as a deeply personal, subjective encounter. It is with this in mind that my performative installations invite the audience-participants to step onto the stage, as it were, and to explore this question for themselves. By providing them with a variety of light-sources, light becomes a medium for their own storytelling. This playful interaction ultimately culminates in a series of photographs, which serve not as art objects in and of themselves but rather as tangible traces of subjective personal encounters in time and space.

No journey through time and space will be complete without encountering some interesting characters along the way – perhaps none more so than Darkness, which affords my audiences the freedom to engage with notions of time in near-anonymity while also being encouraged to exchange stories and impressions on their own terms. This body of work relies on light-based activations and long-exposure photography, which by virtue of the resultant distorted imagery and abstraction of the human form allow for an open-ended and deeply personal interpretation of the subject matter that might not otherwise have been possible. With this body of work I hope to facilitate both personal and collective reflection on our position within time and space in the context of our shared environment, stories, imaginings and projections for the future – all in the here and now.

Darkness, for all its generosity in this instance, also demands a critical engagement with the very idea of ‘light’ and the ownership and distribution of energy resources in South Africa and Africa. This question, when positioned within the context of the new Bird Street campus of the NMMU Arts Department (which historically formed an important part of Port Elizabeth’s original import-export hub) raises further questions about Africa and its status within international trade routes and -relations. The materials used in the production of the works on this show are purposely sourced from local Chinese markets, which typically stock an abundance of cheap light-toys and –gadgets. As a result, a seemingly temporary art installation has permanent bi-products in the form of thousands of discarded glow-sticks, broken LEDs, plastic casings and packaging materials which, in turn, are assembled into new artworks to be sent back to China as a form of ritual-exchange. With the growing presence of China on the African continent this encounter with the ‘materiality’ of China hints at my own initial imaginings of a place that ‘sells’ itself through its food and Made-in-China culture around the world. Now, many years later, in the repurposed Bird Street building, the works relating to the Chinese imported materials and their transformation into artistic statements in preparation for export offers an ironic reference to the balance of power between these two entities.

Given the recent radical transformation of Port Elizabeth Central – from a run-down part of town to a cultural hub, through the Bird Street campus, the Athenaeum, the Donkin Reserve and now to follow, Vuyisile Mini Square, – the light performance on the opening night will offer the opportunity for direct, personal interaction with these spaces, and how they have evolved and continue to evolve through time. In the past, similar light interventions in Port Elizabeth and elsewhere have been as much about activating public spaces through spectacle as it has been about drawing attention to the challenges that face the transformation of these spaces. I hope again to be able to use the medium of light and the act of playful experimentation to create a space for participation and reflection.

Marcus Neustetter was commissioned by the South Africa Post Office to design the International Year of Light stamp series titled ‘SOUTH AFRICANS TELLING THEIR STORIES WITH LIGHT’. The stamps, which feature a selection of artworks on this exhibition, will go on sale in late-2015. 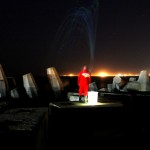 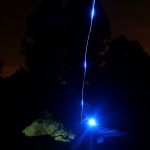 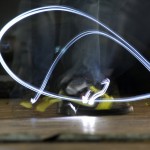 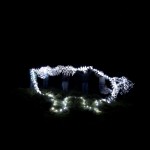 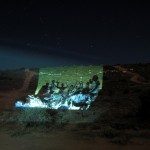 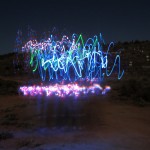 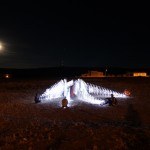 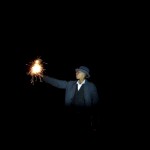 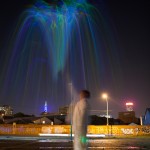 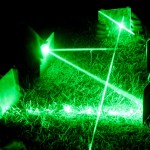 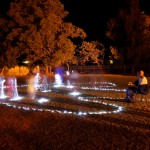 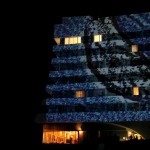 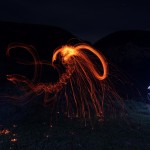